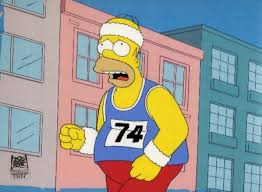 Today was my first run outside in well over a year. I always struggled to run outside as I couldn’t regulate my breathing so after about 5 minutes my chest would hurt and I would be puffing and panting. I used to run with work colleagues and they were all a lot fitter than me and ran easily. I think I must have tried to emulate their speed. I have since joined a gym and regularly run on the treadmill; this is a lot easier as it regulates the pace for you as long as you don’t set it to a ridiculous pace.

Today with great trepidation I headed to the Heath for a run. I have signed up for the Windsor half marathon in September to raise funds for Parkinson’s which is a disease that affects my dad. So I don’t have a get out clause, it is booked in, donations have already started pouring in. A joint enterprise with my sister and I can proudly say we have reached 90% of our £150.00 target in 2 days. We may need to increase it soon.

It took me 20 minutes to walk to the Heath; I fiddled around with the Map my Run app for a minute or two switched my music on and took a deep breath started. The first 5 minutes were the hardest but I didn’t have trouble with my breathing and my pace was nice and steady. My aim for this run was five kilometres but when I reached about three and a half I realised I needed to do more. I needed to push myself right from the word go. If I couldn’t now how would I managed in September. So I reset my target. My usual run on the treadmill is an hour so that was my new target one hour.

The terrain was varied as I ran on pavement, grass, uneven surfaces and slight gradients. I was overcome with elation when I slightly exceeded that hour by a mere 20 seconds and reached eight and a half kilometres.

The only problem was that I had to do the twenty-minute walk back!

I can honestly say I enjoyed it more than I do the gym as I was out in nature but I hurt a hell of a lot more too.